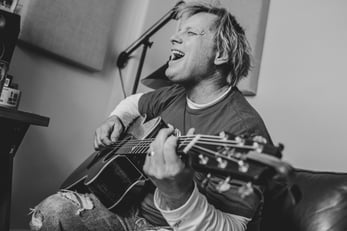 While pursuing his desire to inspire, CJ Ray brings forth his collection of lyric-centered rock, pop and contemporary music. Inspired by the sounds of Train, Gavin DeGraw, Jack
Johnson, John Mayer and Jason Mraz, CJ Ray combines hooks with intelligent lyrics of
hope, contentment, love and forgiveness into each and every one of his songs.

Raised as Chris O’Brien in a suburb north of Chicago, he started playing music at a young
age at church and with kids from his middle school. His first venture was as a drummer in a four-member rock band that covered songs from bands like Led Zeppelin, Van Halen, and Bad Company and featured now-famous classmate, Tom Morello on guitar and lead vocals. Wanting to write and sing, Chris purchased his first guitar in eighth grade for $75 from a local second-hand music store and started writing songs. Influences on his early writings ranged from Neal Young and The Eagles to Led Zeppelin and Bryan Adams. During High School and College he continued to hone his songwriting skills while playing guitar and singing in working bands in Miami Florida and Chicago; eventually releasing a recording entitled Hard Road by CUSA in the mid 90’s.

His first gig as a paid singer/songwriter came after college when he was hired by a start-up company as a producer for computer animated edutainment products. In need of better means of supporting his growing family, Chris set off to build a business in an unrelated field. The company grew, and demanded more of his time. However, not forgetting about his passion, “I carried a handheld recorder with me at all times, and whenever a melody entered my life I would hit record.” said Chris.

This inspired Chris to go back into the studio in 2017 to try and capture the essence of the
melodies obtained through the years. One of those songs being ‘Words’ which was
released back in 2019. ‘Words’ soon caught the ear of film writer & director Micheal Damien who decided to use it in his movie, “High Strung Free Dance”.

Now known as CJ Ray, this Nevada based, singer-songwriter is seeking to find the best
avenue to share his songs of hope and grace as well as other emotional subjects of the
heart, mind and soul. Chris wants his music to make his listeners find joy and peace in any circumstance they find themselves in.

In the midst of him finding his true voice, CJ Ray launched his “For Each Other” Micro-
Grant underscoring the importance of being in service of others by shining a light on their good work. This also the biggest message from his critically acclaimed “For Each Other” EP (released July 2021).

Chris partnered with organizations like Be Kind and Alexandria House in support of his new EP; and has appeared on Kevin Cottrell’s show from The Mission WMCA 570 AM, Jesus Freak and Rockstar Dad Podcasts.

Keep up CJ Ray at www.cjray.com!