"It Is Well" Sheila Walsh with Cliff Richard 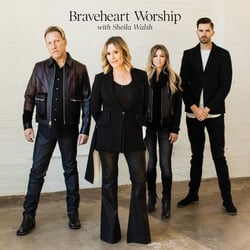 Best-selling artist, author and television host Sheila Walsh has teamed with Sir Cliff Richard for their first duet in over thirty years. "It is Well" is a brand new track from Walsh's new album Braveheart Worship which was released on March 20, 2021 from Venture3Media (V3M).

Her first full-length album in eight years, the 11-song album will be available on CD and at Apple Music, iTunes, Spotify, Pandora, Deezer and additional digital, streaming and physical retail outlets globally. Richard is a longtime friend of Walsh's and has produced a couple of her past albums.